ETHIOPIA – A Story of change on chickpea

Innovating with chickpea cluster farming – listening and learning together

Chickpea is an important crop in Ethiopia, but yields and grain quality remain poor. To help unlock the full potential, CDAIS has supported the value chain around the northern city of Gondar since 2016, in partnership with the N2Africa project. As a result of new platforms, experience sharing and developing a combination of new organisational skills and behavioural change, research and extension support services stopped telling and started listening, and joined forces in innovating together with farmers.

“To produce more chickpeas, we all have a role to play”

“When they told us about cluster farming, I was hesitant because I thought no one would give us support and follow-up. But things were so different.” Kefyalew Asres, chickpea farmer, Gondar

Chickpea is a multi-purpose legume and an excellent source of protein. High local demand means smallholder farmers can increase income through sales, while the rest of the plant is used for animal feed and the chickpea plant improves soil fertility by fixing atmospheric nitrogen. Ethiopia is a leading producer of chickpea in Africa and the sixth largest in the world. However, it exports little, with only a 4% share of international chickpea trade.

According to the Ethiopian Ministry of Agriculture, the overall vision of the national chickpea sector is to have “an efficient and well-functioning chickpea value chain that contributes to improved food security, smallholder incomes and environmental sustainability in Ethiopia, through a sustainable increase in on-farm productivity and strengthened marketing channels enabling reliable and profitable access to domestic and international markets.” Aware of the huge potential, the government aims to double average chickpea yield from 1.7 to 2.3 tonnes per hectare in the five years up to 2019/20, by promoting new technologies. But systemic challenges hinder realisation of this vision, including high prevalence of pests and diseases and lack of mechanisation affecting production; limited supplies and high cost of improved seed, bio-fertilizers and quality pesticides; little attention given to chickpea in the extension system; and inadequate market information, high price fluctuations and high transaction costs.

In partnership with the N2Africa project, CDAIS has been supporting the chickpea value chain around Gondar in northern Ethiopia since 2016. A capacity needs assessment clearly showed that knowledge and resources were unevenly distributed between farmers, input suppliers, traders, transporters, processors and consumers. To overcome this, CDAIS began to support the development of functional capacities, or ‘soft skills’, that would increase impacts and outcomes from uptake of new technology and technical skills.

In partnership with N2Africa, CDAIS has helped to improve the innovation capacity of actors involved in chickpea production and marketing through a platform led by the Tsehay Cooperative Union. The N2Africa project is coordinated by the International Livestock Research Institute (ILRI), and aims to increase smallholder productivity of chickpea and other grain legumes by promoting the adoption of bio-fertilizers and other technologies; but this also requires complementary agricultural, ecological, institutional and organisational capacities across value chains.

In the 2017 cropping season, CDAIS supported implementation of an innovative chickpea ‘cluster farming’ system in Dembia district to address key problems in chickpea production and to support chickpea value-chain development. And cluster farming was considered an important requirement for seed production, being a system that brings many smallholder farmers, each with their small plot of land, to work collectively and plant the same crop at the same time for improved efficiency while retaining ownership of their land.

“This year, thanks to CDAIS, we were able to work better with our farmers, who received money directly from the union at the moment of sale and at better price.” Mr Kese, chickpea farmer and Cooperative Chairman

To reflect on the implementation of chickpea cluster farming in Dembia district in 2017, CDAIS organised a farmer field day at the end of the year. At this event, many more farmers acknowledged the benefits of cluster farming. Importantly, both the government Land Administration Office and the District Municipality also joined the partnership. More specifically, the government heard the need for and took the responsibility for controlling the illegal trade in chemicals, which will eventually require a change in policy. The District Municipality was also requested, and promised, to give land for Gondar Agricultural Research Center to produce prebasic and basic seeds, and the Tsehay union promised to collect and pay for seed from farmers in a timely manner and thus help their financial situation and build trust. And much was learnt. Kefyalew Asres, chickpea farmer and seed multiplication cooperative member, said, “we have come to understand the importance of cluster farming and we hope to improve our practices next year.” Another farmer, Mengistu Mekonnen, added, “I have seen that bio-fertilizers are useful and better than chemical fertilizers.” 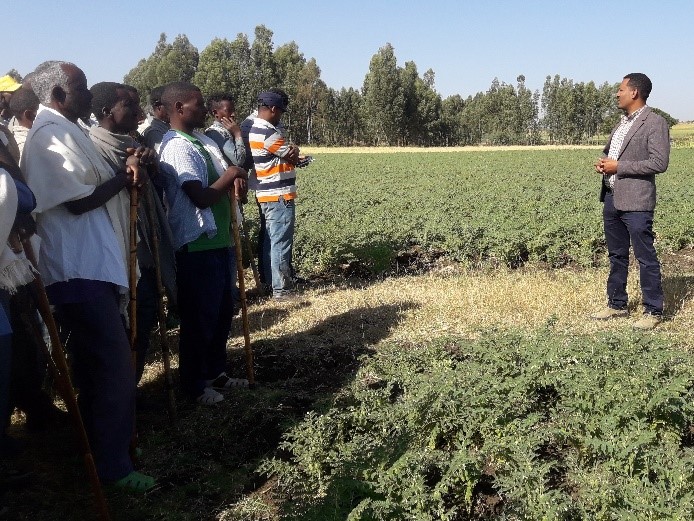 Azene Tadesse, a young farmer who participated in the chickpea cluster farming, shared his experience with the other farmers: “I prepared my land for chickpeas by ploughing several times as was advised by the development agents to minimise risks of diseases, and used planting methods and bio-fertilizers recommended by N2Africa experts.” Yields improved, but he noted that some fields were still affected by pests and diseases, “I have done everything I can, except saving my chickpea field from pest attack – a serious problem that every stakeholder must recognise and solve.” Azene added that he purchased pesticides from private traders and sprayed but with no effect, also noting the problem of pesticide availability, which left him using a harmful chemical. Another problem farmers pointed out was the lack of access to improved, disease-resistant chickpea seed.

Researchers from Gondar Agricultural Research Center also recognised issues raised by farmers in relation to chemicals. It was noted that getting the right chemicals is becoming hard for farmers as they are sold in the market like other commodities. Several chemicals found in the market are banned internationally, but farmers buy them because they are easily available and relatively cheap. They also do not get proper instruction on chemical application and use. It was recommended that Tsehay Cooperative Union should import and supply only effective ‘third-generation’ chemicals, which are less hazardous to human health and the environment, and that the government should give high priority to halting the trade in illegal chemicals. 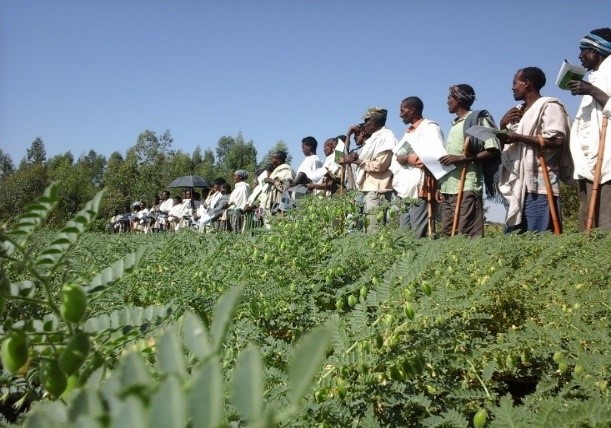 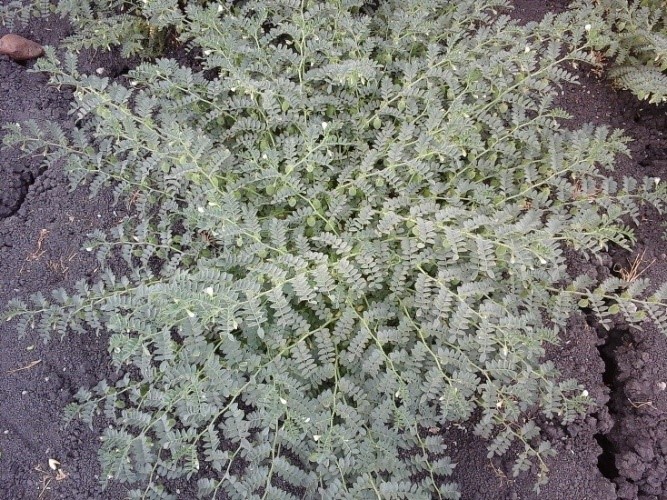 “I learnt that it is not only farmers who should change their practice, we all have a role to play too.” Demilew Nebiyu, Seed Quality Quarantine Officer, Gondar

The need for quality seed

Kefyalew Asres is a member of a seed-multiplication cooperative, and started chickpea cluster farming in 2017. He said, “producing chickpea seed was always a challenge, and cluster farming is not being implemented as expected. But now I see changes as the Gondar research centre and Tsehay Cooperative Union are supplying the necessary seed at the right time.”

CDAIS-facilitated interactions have helped those involved to see things from different perspectives. For example, Demilew Nebiyu, Seed Quality Quarantine Officer: “We have been criticising and blaming farmers for not producing quality seed. I thought the problem was only the absence of cluster farming, but I learnt that it is not only farmers who should change their practice, we all have a role to play too. The District Land Administration Office, for instance, should allocate land for the research centre so that farmers will get basic seed sustainably.”

The best solution is collaboration

CDAIS’s intervention has brought various positive changes, including a common understanding among different actors about the problems of the innovation partnership – the partnership will be further strengthened with government support in the coming months and years. The actors confirmed that, thanks to the capacity building received, joint planning and action, the learning events organised and the introduction of cluster farming, productivity increased from the previous year by an average of 0.6 tonnes per hectare. And the total production of seed has increased, from 17 tonnes in 2016 to 78 tonnes in 2017. A technical advisory group has been set up, links established with Debre Zeit research institute in Oromia Region (600 km from Gondar), and 10 tonnes of basic seed has been secured – double what was expected. Seed has been distributed to farmers, a training manual on chickpea seed production has been prepared, and development agents and selected farmers have been trained accordingly.

Farmers feel listened to, not pushed into a new idea – seeing the benefits of working together. They listen to each other and work together for a common goal and, one by one, the constraints to this new way of working are taken away and more farmers are asking to be part of this initiative called chickpea cluster farming.

As Endalkachew Abie, General Manager of the Tsehay farmers union concluded, “An increase in production of chickpea in 2017 has inspired me and my team to think for big added value. I will work hard now to generate extra funding for this work, and to set up a chickpea processing plant to supply a Gondar brand of chickpea flour for domestic and international markets.”

“We used to practise what we learnt from our ancestors. Before, I never had such close support from development agents as this, and from related training. I benefited a lot.” Kefyalew Asres, chickpea farmer, Gondar