BANGLADESH – A Story of change on pineapple

Building a public–private pineapple partnership in the Chittagong Hill Tracts

Individual farmers often receive low prices for their harvest, and pineapple producers in Bangladesh are no exception. To help them, CDAIS facilitated a series of meetings and coaching. Starting with a capacity needs assessment workshop in April 2017, a coaching plan was developed to meet capacity gaps identified by the partnership of pineapple producers, complete with an action plan. The partnership also participated in a ‘marketplace’ event in Dhaka, a regional policy dialogue and two phases of capacity-building training. The result? An effective new pineapple growers association with competent and confident leaders and better-off members.

“I have learnt a lot, built up my own confidence, and realised my potential in sharing knowledge and ideas with others during CDAIS coaching sessions.” Jessi Chakma, pineapple farmer, and Treasurer of the Bandarban Pineapple Growers’ Organisation

Pineapple is one of the most important commercial fruit crops in the world. In Bangladesh, it is ranked third in terms total production and area farmed, both of which are increasing continually. It is grown in all regions, but especially in the Chittagong Hill Tracts, where many marginalised tribal people became involved in pineapple farming and trade, contributing to both rural livelihoods and national gross domestic product (GDP). Here, the ‘Giant Kew’ variety, known locally as Bandarban, has proved well adapted to local environmental conditions and to local and export preferences, being larger, juicier and sweeter than those grown in other areas of the country. To reinforce this market advantage, the CDAIS pineapple partnership identified branding of Bandarban pineapples as the priority demand.

But farmers have not benefited as well as they could from their crop. Why? Low bargaining power resulting from not being associated with organised pineapple growers associations, and limited market access. Other identified issues include the lack of functional capacities for strengthening existing groups, the dominancy of intermediaries, weak marketing channels, lack of central collection areas, storage facilities and marketplaces, high cost of transportation, lack of knowledge on pineapple processing, and limited access to credit.

In the initial workshop, capacity needs were identified using various ‘tools’. As Altaf Hossain, Deputy Director of the Department of Agriculture Extension, explained, “All participants learnt a lot through these new learning processes, including visioning, net mapping, participatory problem identification, timeline analysis, problem-and-solution tree analysis, and action-plan preparation. And how to draw a picture of the vision/dream for the partnership, how to identify root causes and probable solutions, and how to prepare an action plan were especially valuable for us all.” Jessi Chakma, pineapple farmer, and Treasurer of the Bandarban Pineapple Growers’ Organisation, was clear about the benefits: “In the inaugural workshop in Bandarban, I was introduced to different stakeholders like government officials and non-governmental organisation and media personnel which will be helpful in future work. Participating in the marketplace event in Dhaka, I had the opportunity of meeting a range of different service providers, that was very helpful, to know their various roles and functions.”

“Since becoming involved with CDAIS, I have had multi-dimensional exposure to new knowledge and ideas on visioning, problem identification and action-plan development for improving our livelihood.” Jessi Chakma, pineapple farmer, and Treasurer of the Bandarban Pineapple Growers’ Organisation

Once the problems and capacity gaps had been identified, a coaching plan was developed, and the first phase of capacity building proved very effective for pineapple growers and other stakeholders. Over two days, farmers learnt about the benefits of association, group dynamics and building cohesion and unity. In addition, there was a one-day coaching session at upazila (district) level for service providers and facilitators on understanding farmers’ needs, listening skills, how to collect feedback from farmers, and problem solving, including the challenging area of building channels of communication between farmers, service providers and government officials. “In the first phase of CDAIS learning,” said Hossain, “I learnt the roles of each stakeholder, and it was effective for sharing knowledge and ideas on farmer organisations, and the benefits of working together to achieve our common goal. In the second phase, I got to know the multi-stakeholder partnership concept. And when the facilitator involved each stakeholder through playing a networking game was excellent, with lessons learnt for all stakeholders.”

The second phase of capacity building was also received enthusiastically, including sessions on leadership skills, building trust, effective communication, participatory decision making, and review and reflection. After that, issues were discussed with service providers, including how they could make changes to overcome challenges identified by farmers and how the platform could work better for the partnership. Chakma said, “training on monitoring, evaluation and learning helped me understand target-setting, identifying root problems, and achieving targeted goals within limited time frames. Coaching has also helped me prepare action plans and [in] sharing experiences with full participation through use of effective exercises. In phase 1 training, I learnt how to work in a group, group formation, rules and regulations, networking, and benefits for getting fair prices and bargaining. There was an existing fruit growers organisation, but it was not working due to lack of functional capacity skills. After CDAIS coaching, we formed the ‘Bandarban Pineapple Growers Organisation’ and I was elected the treasurer based on my past record of honesty and commitment. CDAIS is a fulfilment of our desires to build our functional capacities, including networking, leadership development, building confidence, and participatory decision making processes. 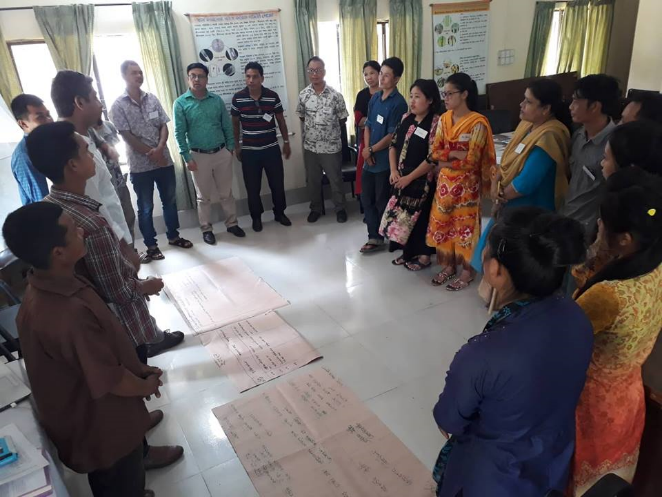 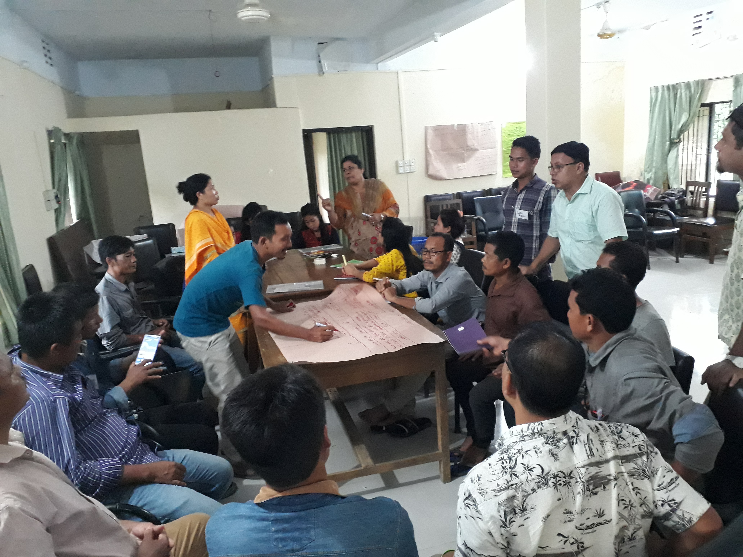 “CDAIS learning processes have proved to be very effective for achieving our goals through involving all stakeholders in a multi-stakeholder platform.’’ Altaf Hossain, Deputy Director, Department of Agriculture Extension, Bandarban, Ministry of Agriculture

In addition, a regional policy dialogue workshop on pineapple innovation partnership was organised by CDAIS in Bandarban and in the presence of Naba Bikram Tripura, Chairman of the Chittagong Hill Tracts Development Board, Rangamati, other government and non-governmental officials, the media, local leaders and others from the partnership. Important policy issues were raised, including the need to establish collection points and marketplaces, and a specialised source of credit for developing community-based entrepreneurs in agribusiness and ago-processing – and government support was offered. Hossain noted, “I learnt what issues could be solved at the regional level and what required national-level changes. The workshop was very fruitful with good interactions between farmers and high government officials.” 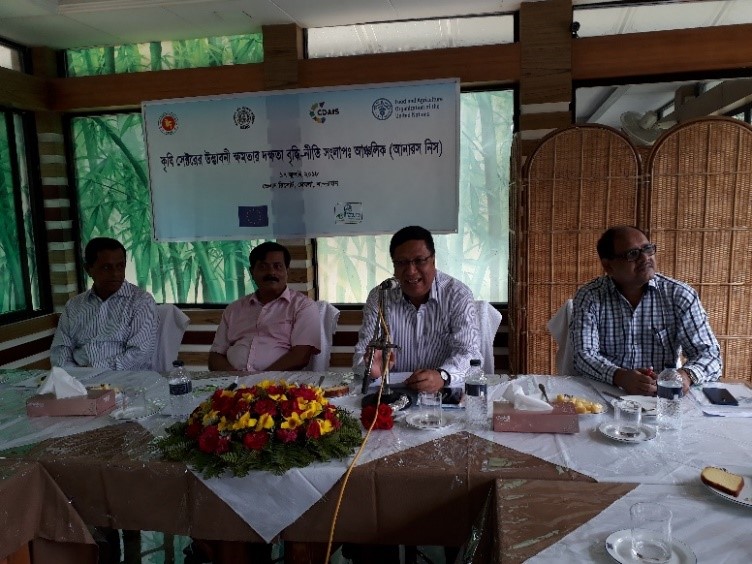 “I thank CDAIS for working with us and helping us realise the potential of our ‘Bandarban’ pineapple that is special in terms of its sweetness, juicy flavour, size and high market demand.” Altaf Hossain, Deputy Director, Department of Agriculture Extension, Bandarban, Ministry of Agriculture

Since the CDAIS interventions, a marked change in the attitude of farmers and stakeholder has been observed. New learning processes introduced by CDAIS have been readily adopted by farmers and other stakeholders. As a result, their understanding about the benefits of group work, action-plan preparation, networking, leadership development and participatory decision making has improved considerably.

Key achievements include that, together, they have identified themselves as a group with common interests, common problems and common solutions, and policy issues at both local and national levels have been explored. They finalised a coaching plan and began to implement it, with a new pineapple growers association having been formed; and they communicate with relevant stakeholders including government and non-governmental officials and input dealers. Before CDAIS, stakeholders did not sit together, but now they work for the common good, and have become accustomed to preparing an action plan and taking decisions as a group. As a result, problems have been gradually solved, and people’s attitude are also becoming more positive.

“CDAIS has taught us new learning processes which will be helpful for improving our livelihoods not only through our pineapples, but also for use in other enterprises.” Jessi Chakma, pineapple farmer, and Treasurer of the Bandarban Pineapple Growers Organisation 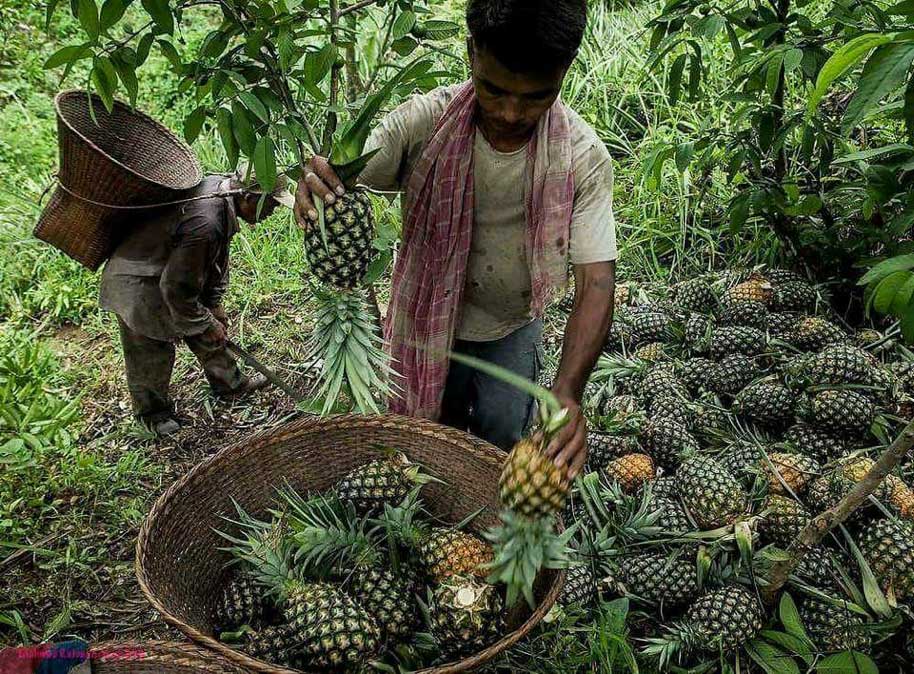 A national policy dialogue was held in Dhaka on 19 September 2018, organised by national CDAIS partner the Bangladesh Agricultural Research Council. The aim was to draw the attention of government policy makers to the issues and potential solutions arising from CDAIS activities in the country’s selected innovation partnerships that could not be resolved after regional-level dialogues. Jessi Chakma, representing pineapple producers, presented five main issues. The first was that there are no central collection points or marketplace for selling pineapples in Bandarban, and local administrations impose tolls/levies on pineapples, particularly during transportation. Second, there is no pineapple-processing facility, whereas countries such as Thailand, Vietnam and the Philippines have created ample opportunities for producing and marketing value-added products. Third, local communities urgently demand the establishment of a brand for locally produced ‘Bandarban’ pineapple based on its special characteristics. Fourth is the need to strengthen value-chain activities supported by local- and national-level institutions through multi-stakeholder platforms. And finally, noting the enormous potential for fruit production, Chakma said that Bandarban deserved to have its own agricultural research centre. The chief guest, Dr Mohammud Abdur Razzaque, Member of Parliament and Chairman of the Parliamentary Standing Committee, Ministry of Finance in Bangladesh, gave consent for solving the issues with the help of a multi-stakeholder partnership process including donor agencies.