LAOS: A story of change on rice

I have been to many meetings about policy but never a meeting like this! The CDAIS simulation reflects the way people really work. You can see the real problems” says Mr Vixay Somchalern, head of the Savannakhet Farmers Rice Association.

Shrimps and rice are very nice

Nikhom Chanthava is a rice researcher with the National Agriculture and Forestry Research Institute, and a CDAIS national innovation facilitator in Laos. “I have been working at NAFRI Rice Research Center since 1991. I have been working with farmers and other agencies in Savannakhet for over three years. Progress here has been very slow,” he says. The reasons are familiar. Farmers can’t afford the necessary inputs to increase yields and can’t access credit, middlemen try to maximize profits at the expense of farmers, and government agencies don’t have the resources to support farmers. “Things have improved,” says Nikhom, “but we need to do more.” Last year, Savannakhet Province exported 800,000 tonnes of rice to China, and other ASEAN countries are looking to Laos as a supplier. Government policy supports rice production for export, so what could be done to ramp up production? Nikhom thinks the answer lies in strengthening the value chain.

And now for something completely different

Nikhom started working with CDAIS in 2016 to improve rice quality and raise production for local markets and for export. “My main focus has been on building the capacity of the local rice association to collaborate with other stakeholders, but the association hasn’t been that effective.” Since working with CDAIS, all the facilitators have become more familiar with participatory approaches, especially the simulation game developed by Patrick D’Aquino, the Agrinatura Focal Point for CDAIS. Patrick has been introducing this simulation as a way of identifying capacity needs. “Of all the participatory tools we have been exposed to through our work with CDAIS, this is the most exciting” says Nikhom. 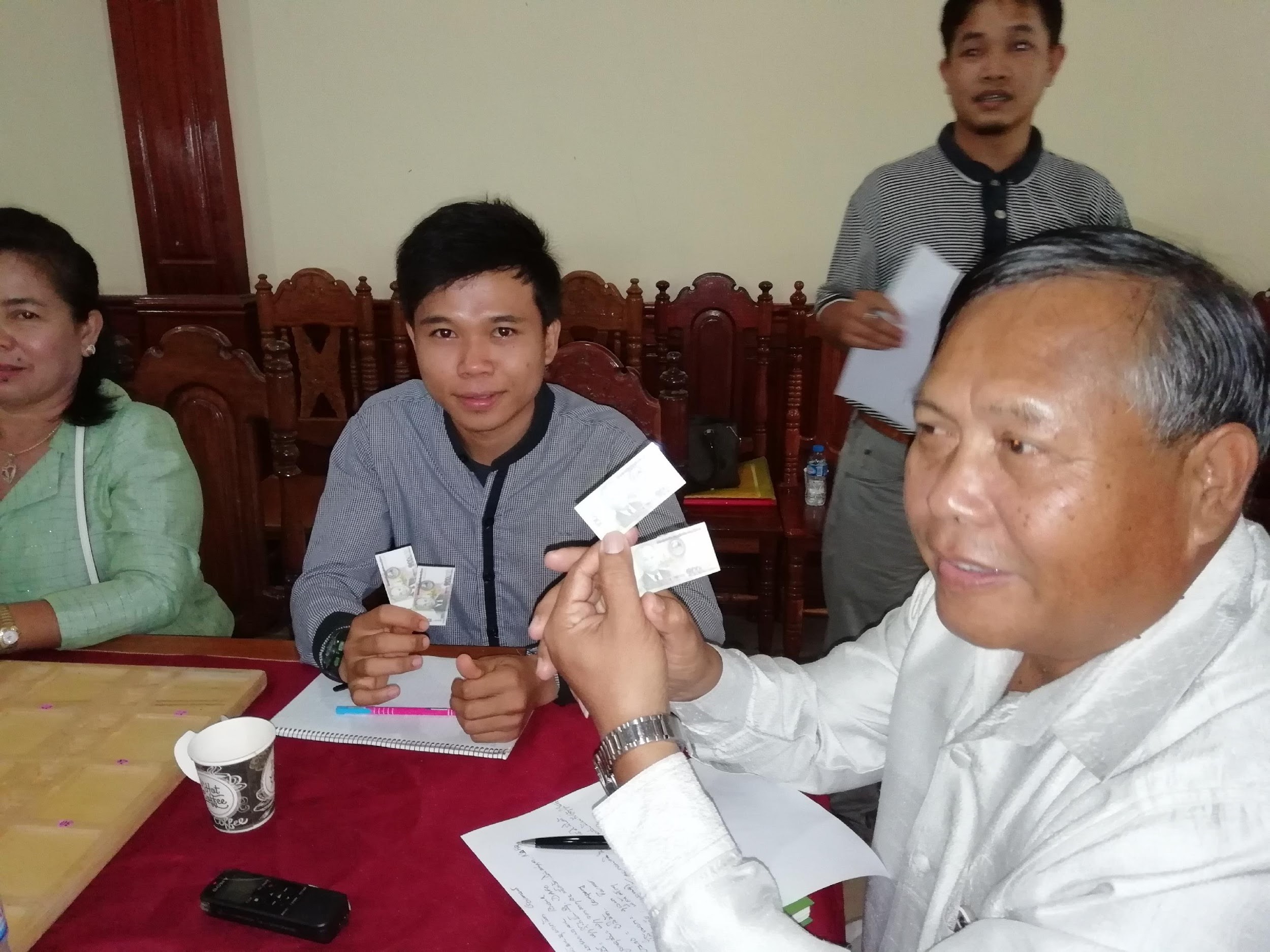 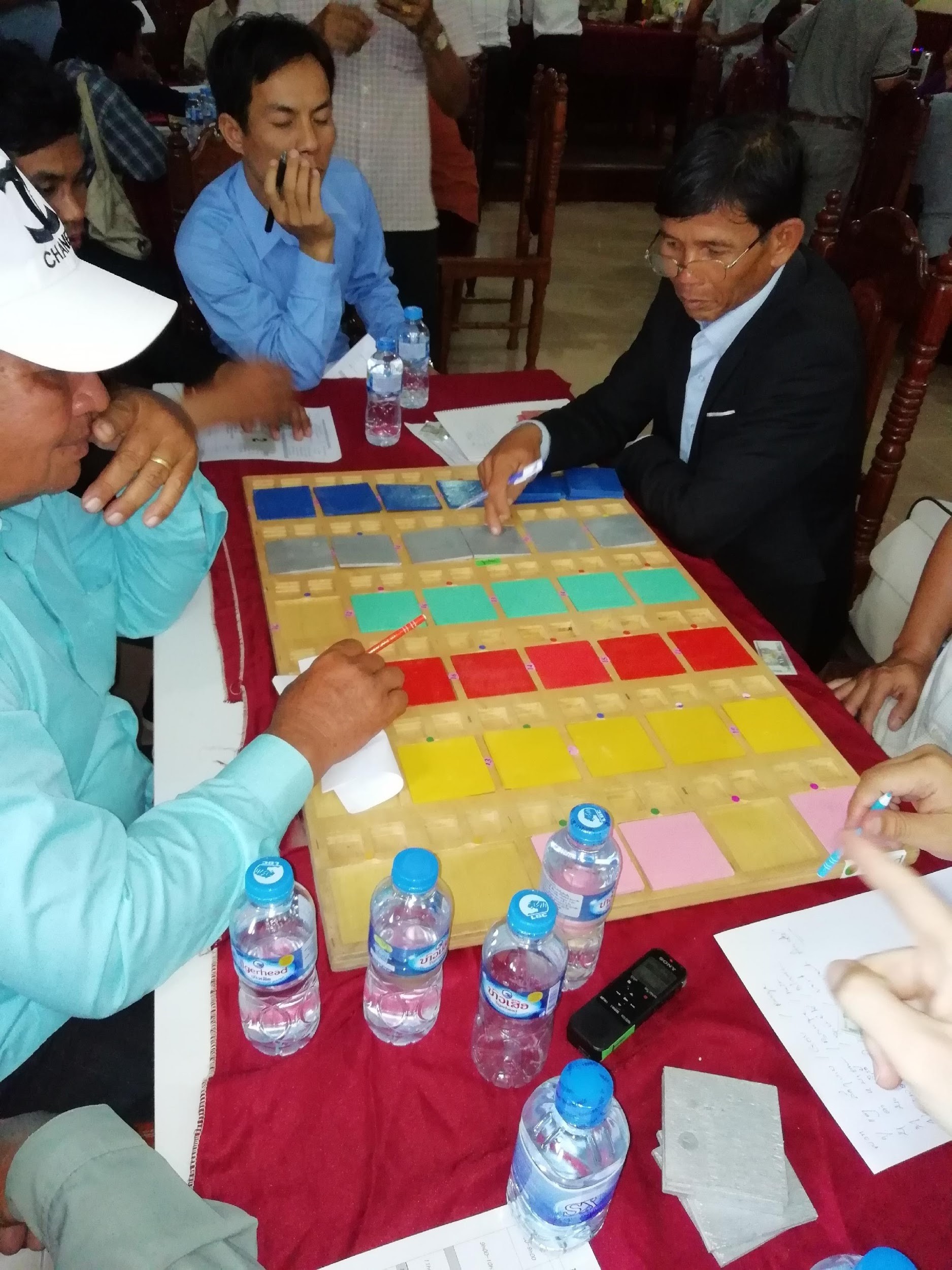 From chaos to insight

Forty-eight people accepted Nikhom’s invitation to a ‘policy dialogue on the rice value chain’. There was no mention of a ‘game’ or a ‘simulation’. Attending were government officers from several provincial and district agencies, the agricultural bank, rice millers, and farmers. People arrive in groups and it’s clear no one knows quite what to expect. Is this another meeting where the ‘big people’ do all the talking? What are all these strange coloured squares on the tables? Following the traditional opening speech from the Deputy Governor, people are divided into groups. In this first round, only farmers, local traders and farm supply companies sit at the boards. Government officials and the bank, technical advisors from government agencies and input suppliers sit separately but can be asked for help by anyone at any time, just like in real life.

At first, CDAIS facilitators are busy explaining what the game pieces represent, the rules of play, and answering questions. It isn’t long before everyone catches on and suddenly the room is buzzing with activity. Farmers make decisions about seed and fertilizer, traders contract farmers to grow their selected seed and farm companies strike deals for later payment of inputs. Farmers go to the bank table to borrow money and to the government table to buy selected seeds. Meanwhile, the banks are asked to come up with a better loan scheme for farmers and convince government ministries to guarantee the funds and provincial and district extension officers have to find money so they can provide better support to farmers. Outcomes are determined by the roll of a dice and then everyone counts their money.

The board and the pieces

The simulation can be easily configured to reflect any number of situations. Pieces can be added to represent other factors (e.g. transport, storage facilities) and player roles can be added. 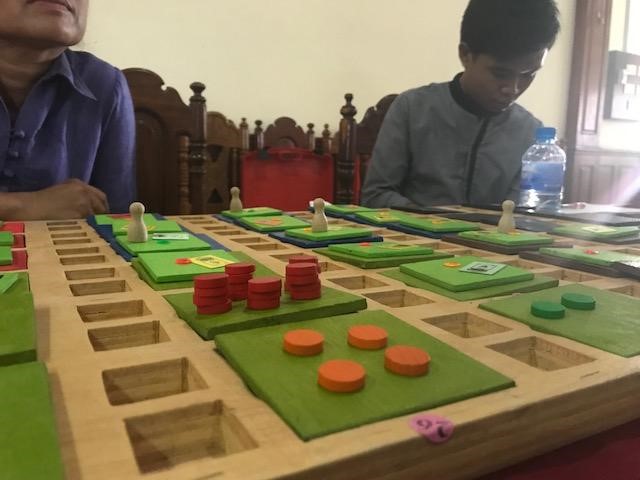 “It’s interesting, playing a different role than what you do in real life requires everyone to think differently” says Martin Aubanton, Agro Department Manager at Indochina Development Partners Lao Ltd. And who played the role of a farmer in round one. “The simulation shows how every action has a consequence, every choice matters, every choice affects other actors in some way.”.

Following round one, participants are regrouped and asked to reflect on specific questions. 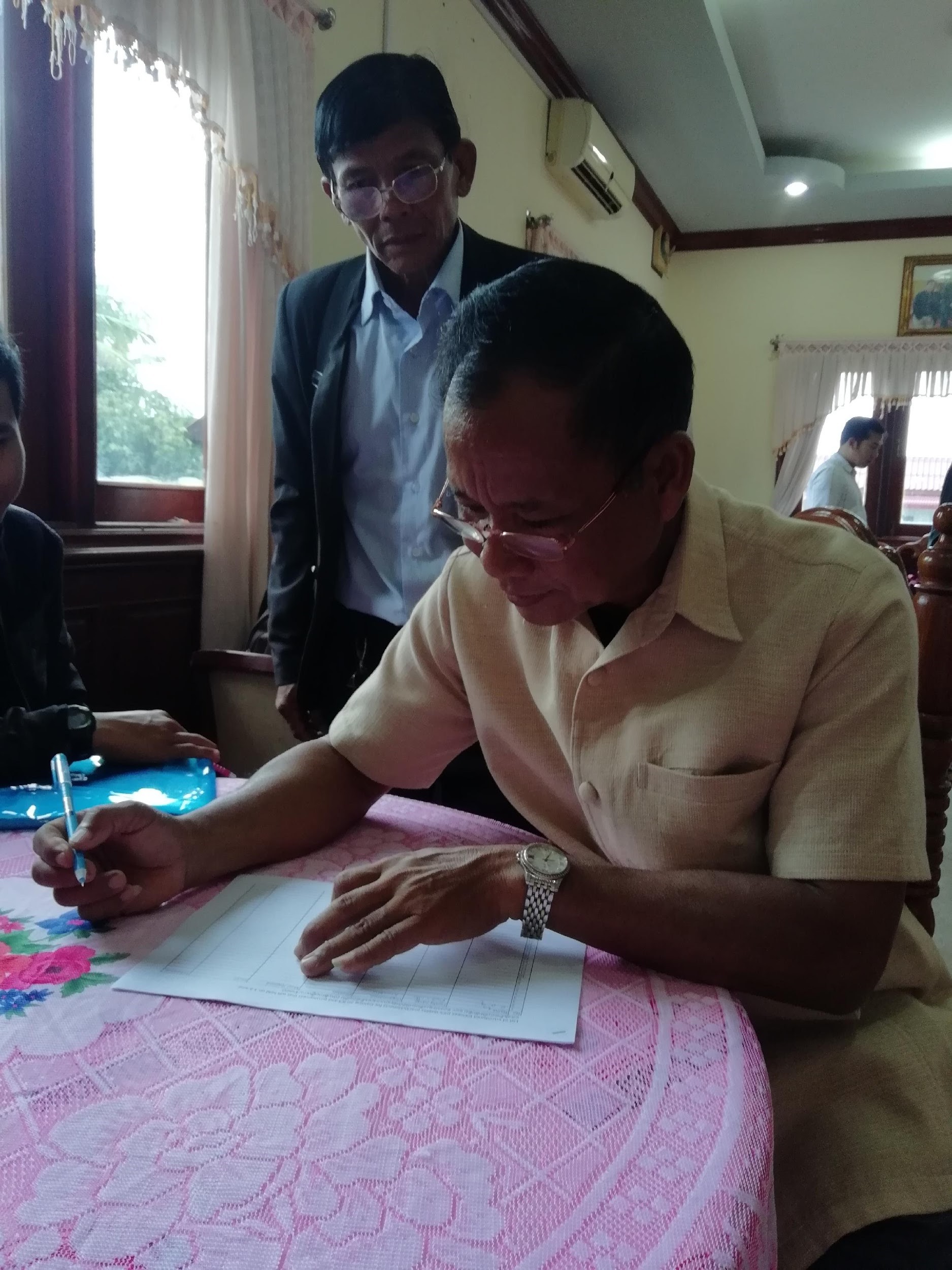 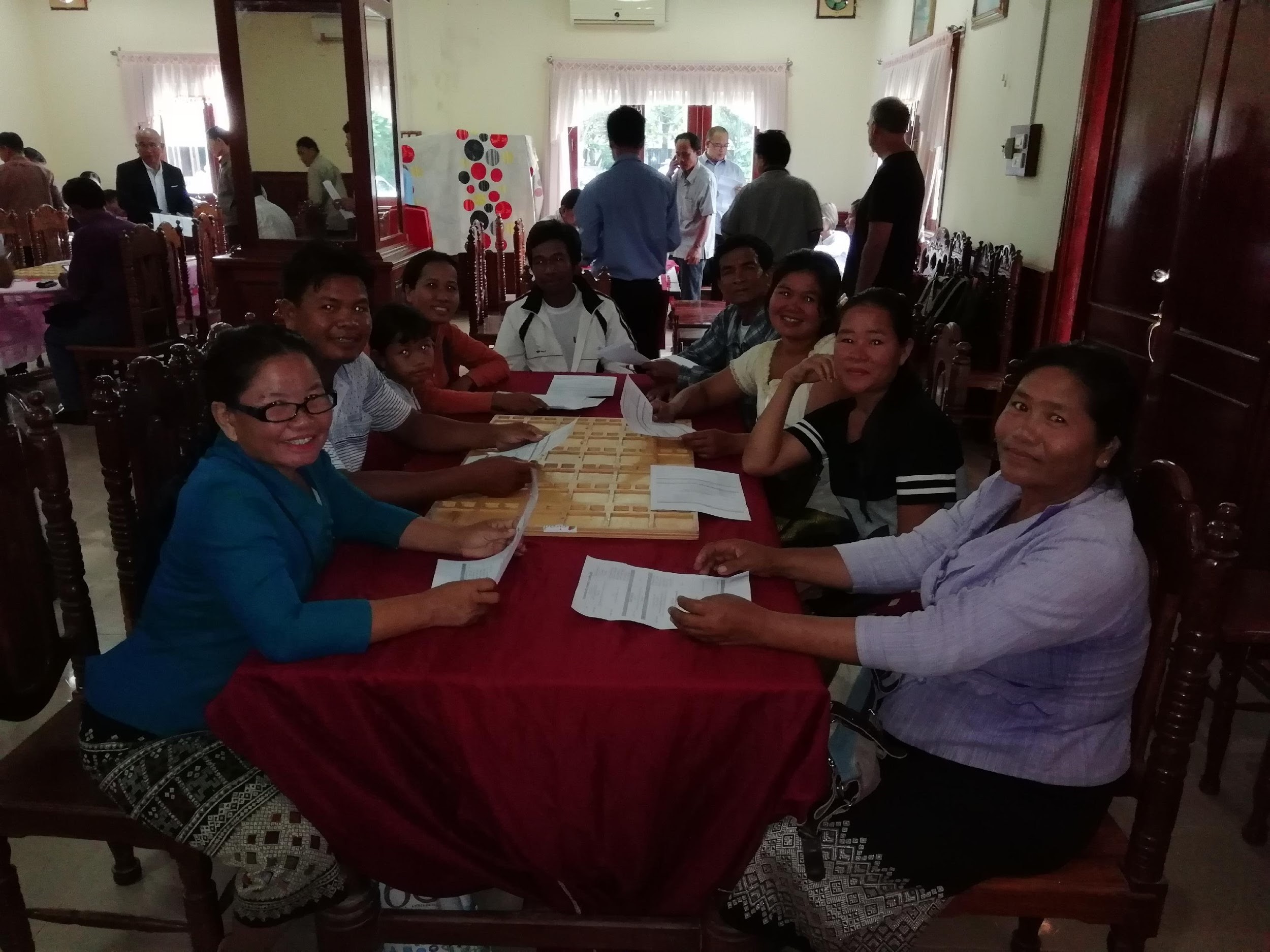 After lunch, everyone takes part in a second round to test the solutions they came up with in their discussions. The final round is a real-world action plan. Each of the stakeholder groups is asked to propose a new action, something they have not tried before, then how they will put that into action, who will be responsible, and when they will act.

“The simulation shows clearly how all the actors in the value chain depend on each other and how we can help each other. And it’s fun! Usually these meetings are just lectures. Here everyone can talk to anyone they like.” Mr Xaysawan Ounoutha, extension officer with the local DAFO of Kayson District.

People love to play games. Games allow us to socialize, demonstrate mastery, learn, compete, relax and enjoy oneself. We usually restrict games to social settings but over the last decade the concept of ‘gamification’ has grown in popularity. Gamification is the application of game-design elements and game principles to non-game contexts. For example, counting calories to lose weight is no fun but now you can download an app to your mobile phone that tracks your diet and exercise activities to determine your optimal caloric intake. It’s easy, it’s enjoyable, and it’s motivating because you can measure your progress.

“The value of a simulation is that people can step outside their formal, official roles and experiment with new ideas. It’s a safe environment.” Patrick D’Aquino, the game’s inventor and Agrinatura Focal Point for CDAIS.

CDAIS will now follow up on the actions participants agreed to at the Savannakhet meeting. “Different actors in the value chain have not always had positive experiences with each other in the past,” says Nikhom. “Now they feel more comfortable talking to each other.” The head of the Savannakhet branch of the state-owned Nayoby Bank seems to agree. “I am glad I came to this meeting. Most farmers have little formal education and in a formal setting like a bank it is difficult to explain to them how the bank works but, in the simulation, they can understand very well.”

“I used to be afraid to talk to the people at the banks, but now I have met them and I feel confident.” Mrs Malahomorn, one of the farmer participants.

In the coming months, CDAIS will adapt the simulation to engage with government agencies at the national level on ways and means of linking policy with action-on-the-ground. “A policy dialogue is not a meeting,” says D’Aquino, “it’s an ongoing process.” 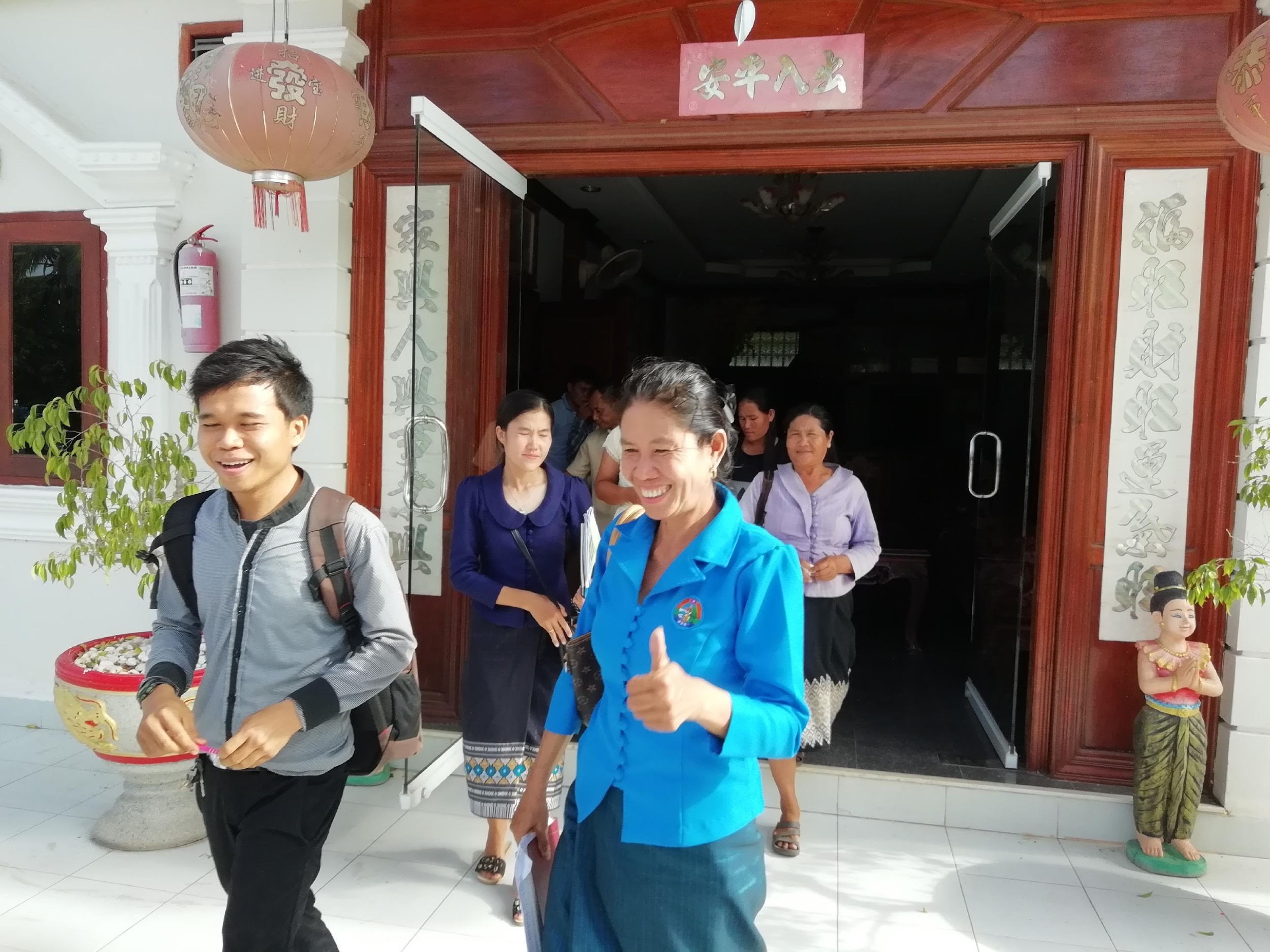