GUATEMALA – A Story of Change on bees

Making the move from traditional to modern beekeeping

From the Maya to modern times, beekeeping has been a much respected rural activity in Guatemala. Then in recent years, production increased and a national association was formed. But internal disagreements soon saw a fall in production and sales. Then thanks to CDAIS, producers across the country asked for and were given, a new space to gather. And there they rediscovered their common interests and goals, and have re-established their original organization, to excellent effect.

Following the start of exports to Europe in the 1990s, beekeepers identified a need to further improve the production, marketing and distribution of honey and other bee products. And following dialogue between various actors in the beekeeping sector, the National Apicultural Council (CONAPI) was established in 2001, consolidating 11 different associations. However, the road proved difficult, and in 2007 there was a fracture and the organization broke up. But as export markets became more accessible, beekeepers reacted, realizing that they needed to work together more than ever. “And this was the main reason for the reactivation of CONAPI”, says Cristian Miranda, a young activist promoting Guatemalan beekeeping.

“Involving different beekeeping organizations resulted from CDAIS helping us to identify together that we share common needs and interests.” Cristian Miranda, beekeeper and member of CIPAC, San Marcos

“We started in December 2016 with one meeting, then another, before CDAIS helped us to organize a capacity needs assessment workshop in March 2017” reveals beekeeper William Velásquez, and an active member of the CIPAC association. He then takes up the story… “This was an eye-opener where we learnt a lot. And building on that, CDAIS helped us to participate in the agritrade marketplace where we looked for alternative markets and exchanged lots of thoughts. There, we learned how to talk, top others, in public. We learned how to share ideas. And importantly, we learnt, even after 20 years working in our associations, that this was a way of strengthening our capacities.”

An organization is a honeycomb

CONAPI’s constitution states that it includes 809 producers, 111 women and 698 men, who together manage a total of 43,254 hives, or some 50 hives per producer. “And the reactivation of CONAPI is one of the great achievements of CDAIS” says William Velásquez. “We are all fully in tune with the methodology that CDAIS proposed, and with time, the results are being realised… We have a joint account and in legal terms everything is in order; from the receipt of donations to the issuing of expenses.” And he adds that “CDAIS interventions have been a directly cause of this rejuvenated national platform that has benefited all our us and will surely bring more in years to come.”

Reorganization, the key to collective action

“The greatest achievement of CDAIS was achieved from the reorganization that was crucial in consolidating and reactivating the CONAPI platform” says William Velásquez. “Exchanging methodologies with professionals from other fields diversified the range of products we extract from our hives, but for that to happen, it was also important to know and recognize ourselves. This meant changing our attitudes and ways of thinking, which was the most difficult thing for us because we are so used to being given everything.”

A good example of how CDAIS helped in this transformation was a training day held on 18 April 2018. Members of CONAPI realized that they needed a strategic plan, but also that they lacked the skills needed to develop one. With support from CDAIS, they identified and contracted a specialist in working with associations, Jesus Villafaro, and he started the day by saying that “We are here thanks to CDAIS, and to support this process that you asked for.” And the results were clear. Speaking for the group, Carlos García of the Integral Apicultural Cooperative Cuilco (CIPAC), Huehuetenango, expressed their appreciation. “Today has been a huge step for us all, in building a common strategy – together – so we lift the profile of apiculture in the country, and beyond. And thanks to CDAIS, for this opportunity to meet and advance towards our goals” 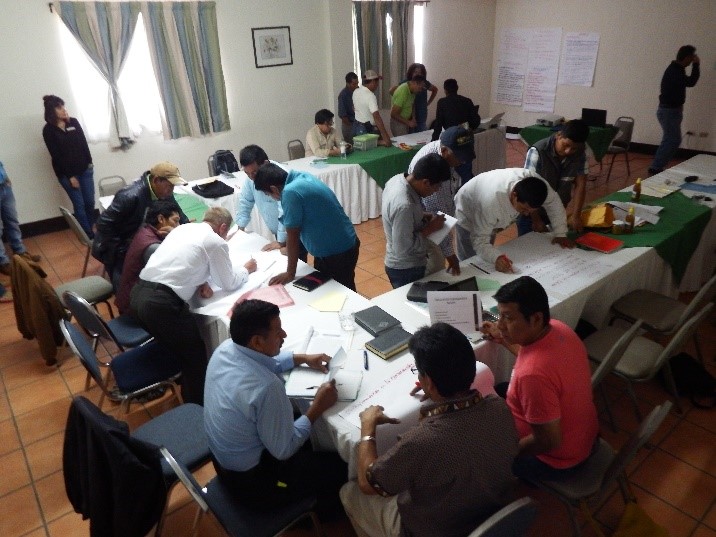 “CDAIS has opened up for us the possibility of entering new markets and taking a bigger step as beekeepers. But this has occurred not through being provided contacts, but because CDAIS has taught us to reach spaces we did not know.” Esvin Estrada, president of CONAPI.

Beekeepers in the partnership are now aware that it is necessary to innovate and to take significant steps forward, not only in productions but also in sustainable marketing plans. And the contribution of CDAIS in the development of functional capacities is ideally complemented with technical skills of traditional beekeepers. But the process has not been easy, but there is now consolidation at the national level as a spearhead in this transition process. “Boosting beekeeping is fundamental not only for producers, but also for national food security and to protect our forests” says Alvaro Almengor of the COPIASUR cooperative and a beekeeper for more than 30 years.

“There have been a lot of projects that promote production, but CDAIS is new because it helps us to do something different – to promote contacts, make the most of those contacts, and provide opportunities for innovation, that is leading to transition.” Cristian Miranda, CIPAC member and national innovation facilitator.

And change now is seen at all levels…

Secretary Karla Paz acknowledges the effects from the process. “CDAIS was a unifying influence that really helped to bring the groups together and reinvigorate our national association. Before CDAIS, we only rarely met… Then we would meet, but then we saw that we needed to plan. CDAIS then helped us formulate a plan. Then when we had a plan, we didn’t know how to put it into action. CDAIS helped us to start to implement it. We have seen institutional changes. Now, here we are, together, advancing again.” She also noted the personal change. “I have also changed, myself. I now see the important of personal competence and confidence to achieve our goals.”

William Velásquez was also clear about the links between change at different levels. “CDAIS strengthens our capacities to grow, to see clearer our own way, to see much better within ourselves our needs and what we need as farmers, as producers, as people” And in his own experience, “Since becoming involved with CDAIS I have seen the change in how I myself look at things. I understand the need to get to know others first, to understand their situations, and how this helps me become better able to share experiences such as our different ways to market our products. We have also developed lots of new links, and this is an innovation – to share across value chains, such as with CDAIS avocado producers. Our bees pollinize their avocadoes, but we also see new ideas from CDAIS as pollinizers of our minds.

“CDAIS encourages a change in attitudes in everyone, that the project calls ‘functional capacities’. But I call them basic skills – and the confidence to put them into practice. Though I also see how the CDAIS process leads to a change in individual attitudes and in those in organizations.” Cristian Miranda, beekeeper, member of COANPI and CDAIS national innovation facilitator

The newly reformed national association also decided that it should broaden its horizons and not wait for things to happen on their own. And part of this was the World Bee Day event held last May, where members of the beekeeping partnership participated, showcasing their work and the range of products (not just honey), and the importance of the alliance. The meeting was added value thanks to CDAIS support, and as members learnt how to raise their profile and the process as a long-term strategic plan. 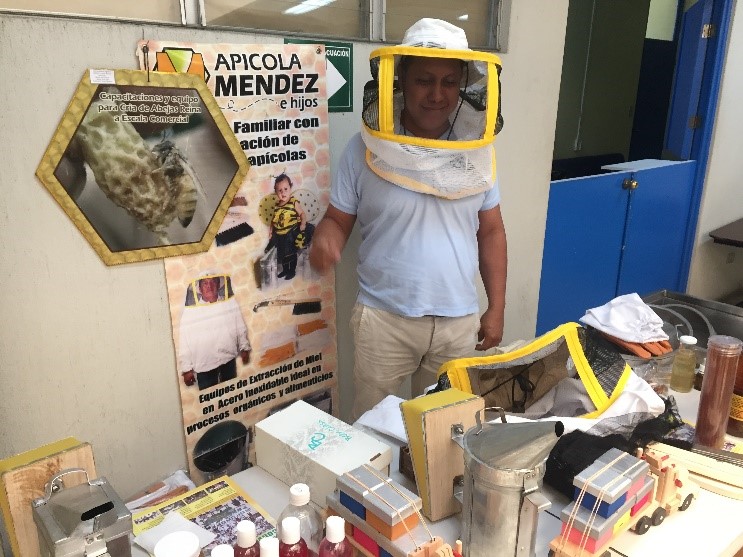 Now CIPAC and CONAPI work closer together to integrate new organizations and promote alliances with a dream of having a beekeeping school and in attracting new youth to the group, “as we need them to carry on our work with us and after us…, and we need them to help us to encourage others….” And with such a vision, the future will be sweeter indeed.