“The CDAIS project brings an innovative methodology because it creates capacities in us as human beings” explains Carlos Valladares of the Intibucá Farmers Network. “This has improved our understanding of our situation, we have taken full responsibility for it, and are now better able to obtain and manage information to improve producer organizations”. Associations in the region have appreciated the spaces created by CDAIS that allow them to link with other stakeholders, find solutions to common problems, and now, to even take issues to the national policy level.

“From a problem arose a strategy, and all the links of the chain have now come together to find solutions to the issues posed by the potato psyllid” explains Héctor García, national innovation facilitator for the potato partnership in La Esperanza. “Now those involved do not act alone, are all aligned to a shared vision and combine efforts to achieve their goals. Before there were conflicts and competing interests, but now there is a motivated, orderly alliance that is working toward solutions – and achieving them!”

National annual production is more than 40,000 tonnes (895,000 quintals), grown on around 2500 hectares by more than 6000 smallholder producers, this satisfies most of the national demand and also generates some 15,000 permanent jobs on which 35,000 indirect beneficiaries. Mostly in upland areas of Intibucá, Ocotepeque, La Paz and Francisco Morazán departments, 85% of growers produce on less than 0.35 hectare, and are mostly from the Lenca and Chortí ethnic groups. But during the January-June dry season there are risks of severe damage by pests, especially the potato psyllid also known as paratrioza. Losses can be up to 80%, with control costs significantly reducing profitability. Also, potato production depends almost entirely on imported certified seed potatoes, mainly from the Netherlands, making up 40-45% of production costs, so developing national certified seed potato production is further goal.

PRONAGRO had started working within the partnership to improve the competitiveness of the potato sector through management and facilitation of concertation and decision-making processes among key actors, but something was missing. Actors attended meetings to talk about their own problem but didn’t share a common vision. So this partnership was selected by CDAIS in 2016. A multi-stakeholder dialogue and capacity needs assessment identified the need to create and strengthen leadership, organizational and business skills around three common objectives. Key aims were to (i) strengthen links between producers, traders, local government, universities and financial institutes; (ii) establish an integrated strategy to control potato psyllid; and (iii) improve producer access to required resources. Also, as Edwin Flores, Secretary of PRONAGRO and a key partner said, “The self-analysis facilitated by CDAIS generated a common vision, identified strengths and weaknesses, and the need for links, cooperation and dialogue to help find solutions. And we have progressed well along this road.”

“An impact of CDAIS is that we have adopted a new way of looking at things, developing people’s capacities to learn to work together, as we can only get so far by walking alone…”Héctor García, national innovation facilitators for the potato partnership, La Esperanza

The potato partnership has seen great changes since its inception in 2016. Through CDAIS’ work, a technical committee was established, and an action plan developed and validated. Nine community-level organizations were formalized furthering collaboration amongst actors, and they began to get their voices heard in decision making. As Carlos Valladares of the Intibucá Farmers Network explains, “CDAIS supports processes that have improved internal organization in producer groups and the whole potato chain, also improving technical assistance by getting individuals and groups to agree on common needs.”

“With the capacity development started through CDAIS, we have advanced our technical, marketing and organizational skills” says José María Pineda, a potato producer in Bethlehem, Manazapa, Intibucá. “And now we have better knowledge especially in managing potato psyllid which destroyed my entire crop two years ago. Today, we know how to cope, and my plot is the best in the area.” But he added that benefits are not just technical. “Belonging to the partnership is a great help because we all meet to consult, share, listen, debate and resolve our problems – we are no longer alone. Before we were at the mercy of middlemen, or coyotes as we call them. Now we have a new marketing system and have secured a fair price. Oh, to be organized, and woe be to me if I leave the partnership! ”

One member of the partnership is ASOFAIL, the Intibucá Association of Artisanal Farming Families established in 2011, with 139 members mostly from the indigenous Lenca people. “We now have 10 certified farms and a collection centre and sell to supermarket chains including Walmart” says association member Arlis Zepeda. “Farmers talk more now, and share information, with positive effects regarding production, post-harvest and marketing issues. But we also had another big problem”, Arlis reveals. “Many children of potato farmers think their only option in life is to emigrate north and abandon their agricultural heritage. So, we started providing another panorama for them, with an innovative programme of training and motivating. And skills I learnt through CDAIS help me to empower this generation of young producers with micro-entrepreneurial capacities, giving them a new attitude of hope and pride, through education, gender equity, maintaining family unity, and reducing emigration by providing dignified agricultural work.”

Another unexpected benefit of the impact of capacity building is the new awareness of environmental pollution caused by indiscriminate disposal of agrochemical containers. The partnership played a part in the establishment of a network of special bins where farmers now bring their empty containers, instead of just throwing them away in their fields or rivers.

In April 2018, 15 actors from the potato partnership met at a centre in La Esperanza, Intibucá, Honduras. The aim – to identify policy issues that hamper them in achieving their common vision, what changes they would want to see, and how they might do this. And this policy dialogue process, led by FAO in the eight CDAIS pilot countries, builds on the previous work carried out in each of the innovation partnerships, such as supporting the identification and agreement of common visions, problems and finding means themselves to overcome them. But some issues such as national laws and regulations, would normally be beyond their abilities to address, so this process will build capacities in how they can bring their issues to the national government level. But Carlos Valladares explained,“We definitely need policies to regulate the market, reduce impacts from oligopolies and revise imports and tariffs, but this may be more feasible through local government because they are more aware of our situation.” And these and other views help FAO and CDAIS consider how best to take them forward. 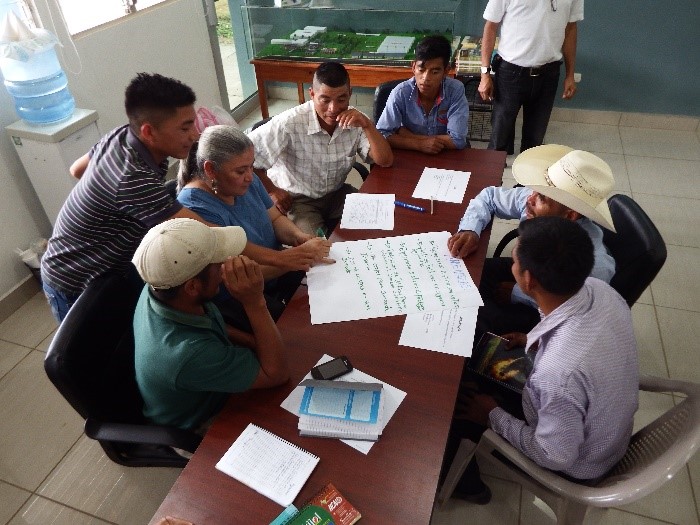 “The approach that CDAIS uses is new and it took time for us to understand it, though it has since helped everyone in the partnership understand the situation faced by the potato industry through the spaces that the project has opened. We have all accepted the challenge of the work plan, accepted our commitments, and hope to continue with CDAIS in organizational strengthening including the emergence of new sub-sector of specialized seed potato producers”, explained Edwin Flores.

“CDAIS contributes to strengthening the potato partnership by integrating processes to generate an environment of understanding, and the availability of ‘support to all’ to address their common issues.” Edwin Flores, PRONAGRO, La Esperanza, Intibucá