LAOS – A Story of change on organic production

Sowing the seeds of an organic and nutritious future

“We have changed already since CDAIS started working with us” said Mrs Khammone Luanglath. “Because of the project, we have for example divided our responsibilities within the group and our profits have increased.” The CDAIS project is working with a group of organic vegetable growers in Tongmang village in Vientiane province, who produce for local markets. It has helped them to better identify their needs, and is supporting their capacity development so that they can improve their functional skills, to help them to better invest, organise and increase production and sales.

“People in Laos know the benefits of organic vegetables, that they taste better, last longer and are more nutritious. And our members have an unlimited supply of the very best – and we make a good profit from our sales.” Mrs Khammone Luanglath, deputy head of the Tongmang organic vegetable growers group, is proud of her achievements. CDAIS became involved in 2017, to help to strengthen the group, and facilitate them in identifying challenges and solutions, with some immediate successes. 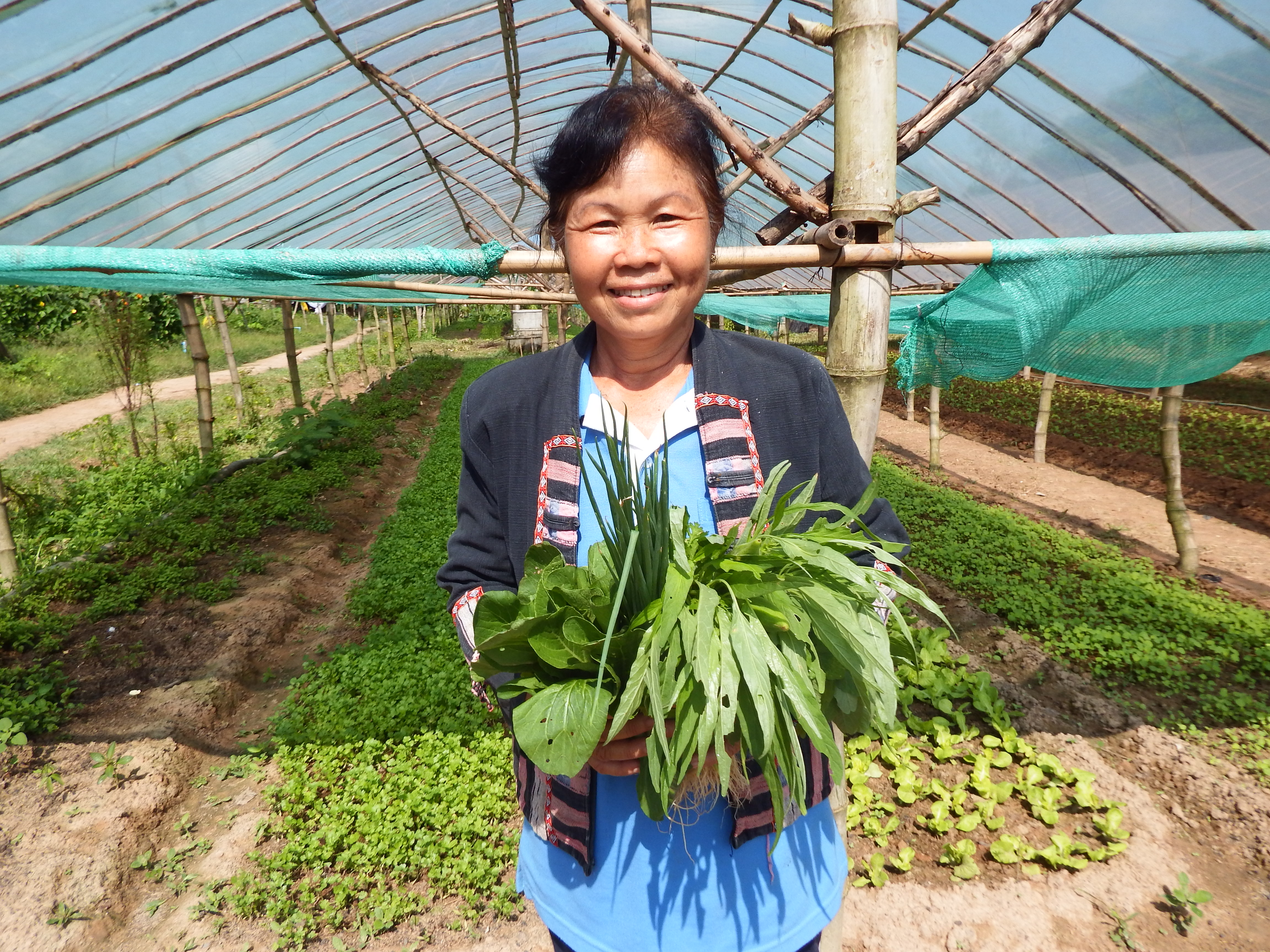 “Our farm is like a school for us – we learn something new every day” Mrs Khammone Luanglath, deputy head of the Tongmang organic vegetable growers group, Lao PDR

From small seeds, to…

The organic market is growing, and in response, the Tongmang organic vegetable farmer group was set up in 2015 by the government District Agriculture and Forestry Office (DAFO). The 12 founding village members were initially trained to produce organic compost and bio-extracts for pest control. Later, a site was found for them, with 12 shade houses on two hectares, rented from private individuals for US$60 per year on a 3-year contract from May 2015 to June 2018. Then a second two-hectare plot was rented for a 10-year period from Mrs Lavone Philasaypitak, head of the group, who was also able to loan seeds and inputs to group members who do not have the means, to be repaid in kind after vegetables are sold. 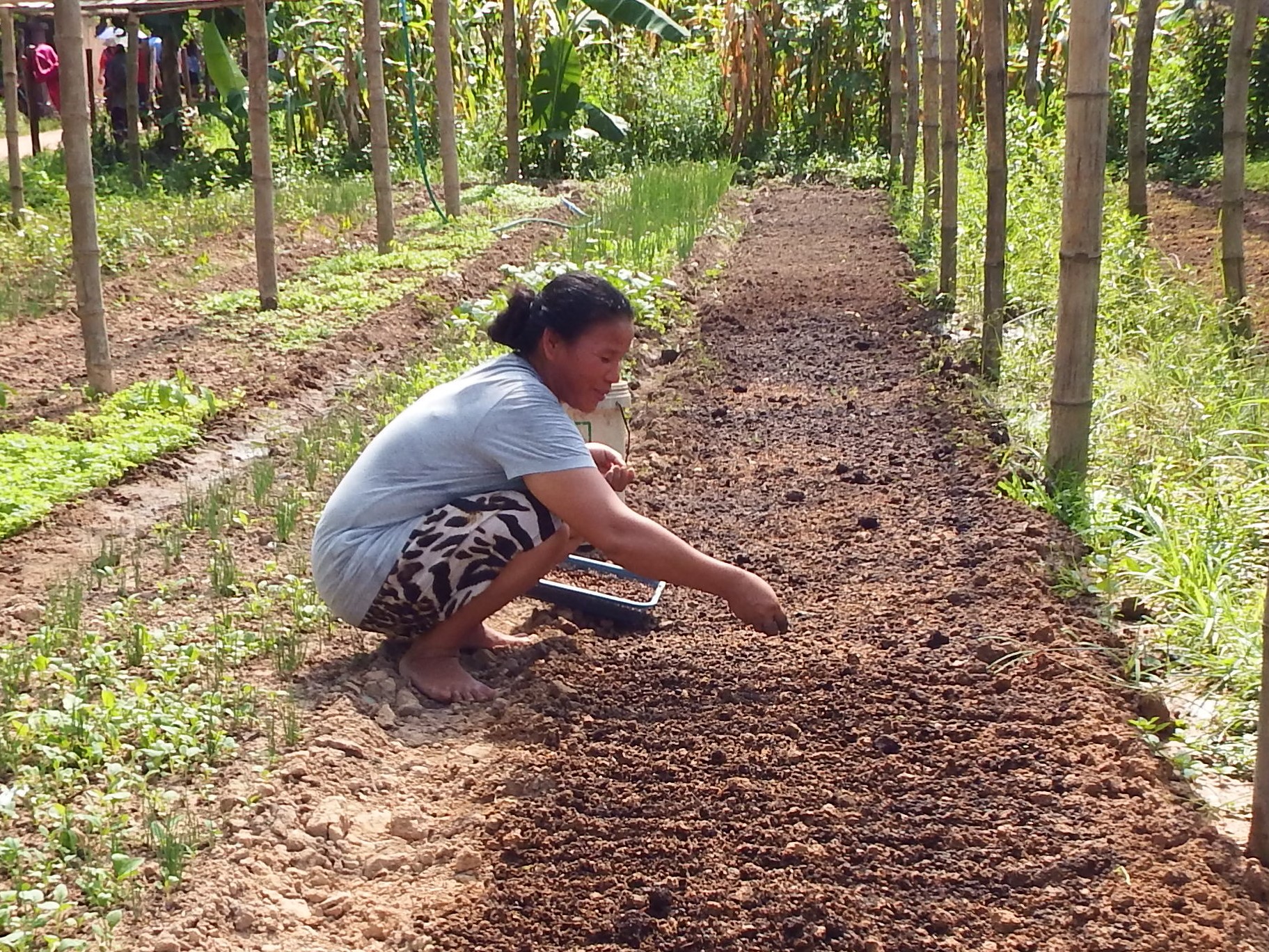 At the beginning, the group built 15 simple shade house structures from bamboo poles, and covered them with plastic sheets provided by DAFO. In 2016, they joined the Lao Farmers Network who provided training on strengthening group capacities in management, finance and marketing. The group then expanded to 43 members, including 16 youth, who together now farm 4 hectares with shade houses and an adjacent 18-hectare site of orchards and private plots. The group grows 45 different types of vegetables, along with mushrooms and various fruits from the orchards such as banana, papaya, dragon fruit, lemon, tamarind and other tropical fruits. 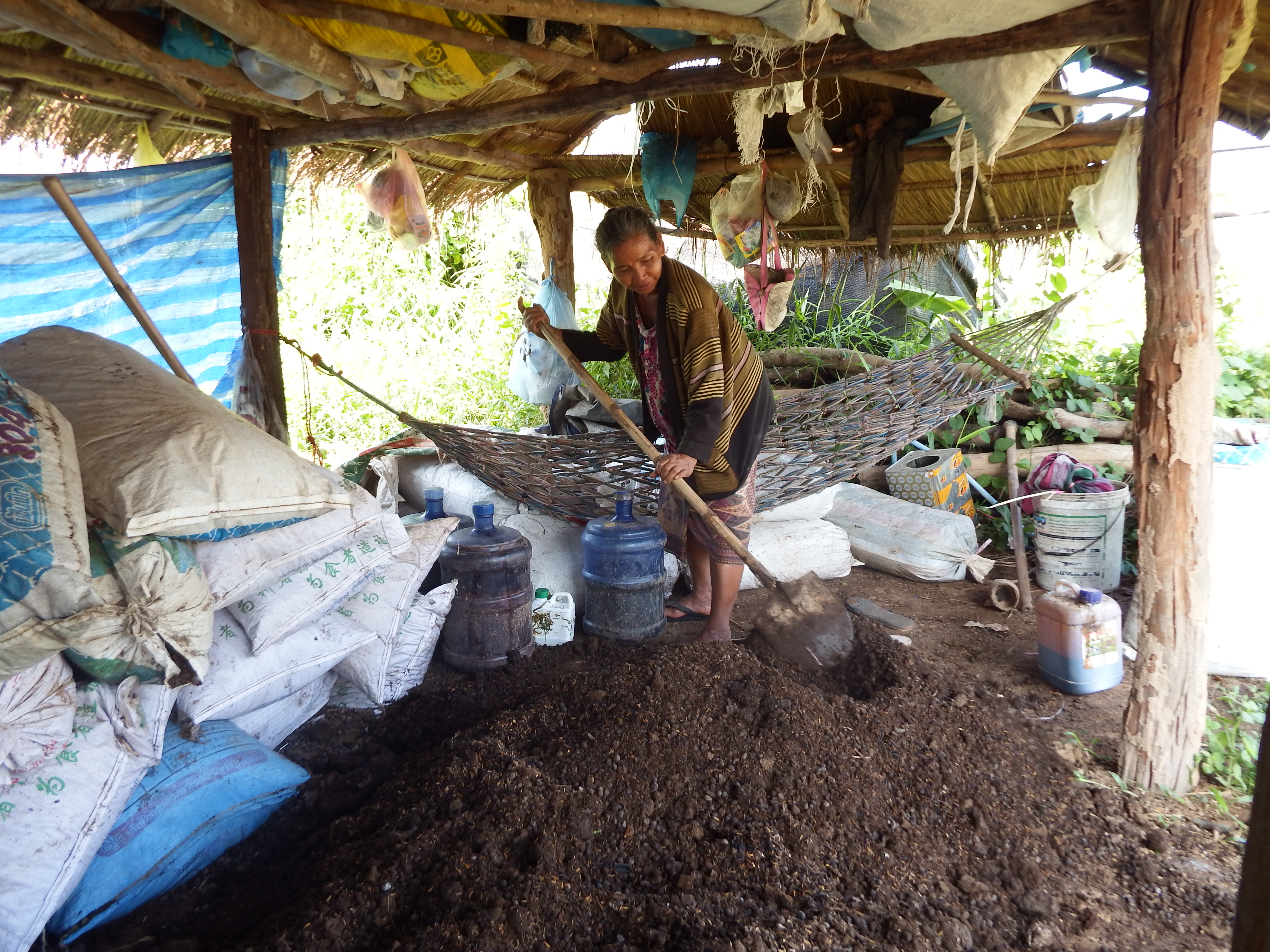 Group members pay monthly fees which are used to buy tools, seeds, other inputs, and to support the marketing of produce. But this money is not enough to allow for the much-needed new investment in new shade houses, to dig boreholes for irrigation or to buy machinery for land preparation, cultivation and mixing organic fertilizers.

The ‘capacity needs assessment’ workshop for the organic vegetable growers’ groups took place in April 2017 at Tongmang village, with 27 farmers and 16 youth, nine out of ten of whom were women. The group identified three main ‘hotspots’ where they wanted support from CDAIS to develop their capacities. These were to help them (i) obtain credit or investment, (ii) to produce vegetables and fruit in the rainy season, and (iii) to improve their ability to market their produce. The lacking capacities for each were detailed, and a list of activities were agreed that would reinforce or build upon them. These were then combined into a plan of action in a fully participatory process. 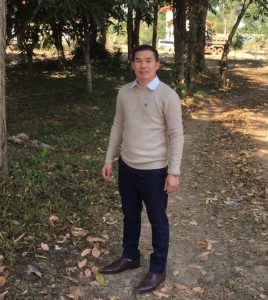 Khanthanou Lorsavanh, the national innovation facilitator who leads this niche, said the greatest need of these farmers is to increase their ability to grow vegetables in the rainy season. The monsoon conditions are so different that most vegetable farmers find it especially difficult during this period, and because of this, the price of vegetables is very high as compared with the dry season. “So”, said Khanthanou, “I planned to provide them with training on how to test their soil, how to make appropriate organic fertilizers, and most importantly, what were the best pest and disease control methods to apply during the monsoon period.”

But Khanthanou explained that his support was not just as a provider of technical information, and that CDAIS had equipped him with many other skills that he was now passing on to the farmers. “Besides being trained as a facilitator, I also learned, for example, how to teach farmers about calculating costs of production.” He goes on to explain that after this knowledge was transferred, eight farmers had the confidence to take out loans, being newly assured that they could repay them. And each of the farmers was able to repay the one-year loans within seven months. This success has inspired others, and next year, 15 vegetable growers plan to increase their production by taking out loans from the same microfinance institute to build more shade houses. “I am so very happy to see the progress that they are making” he adds, with a smile.

“Growing vegetables is not as difficult as you think”, a girl in the youth group told Khanthanou. “I know how to do everything as I have helped my parents in all the steps, sowing seeds, transplanting, watering, weeding and harvesting.” The youth in the group were certainly keen, and they saw a great opportunity. They met, and first agreed on what crops they were going to grow, but they also agreed on what they did not know, and what training they needed. This included how to make organic fertilizers, and the best pest and disease control methods. They also agreed to divide certain tasks. Boys said that they would work on land preparation and watering, the girls said they would sow and weed, and they would work together on transplanting. They prepared daily working schedules for before and after school, and on weekends. Mrs Khammone said children really enjoy growing vegetables, “and they are very happy to earn some money that helps a lot in paying for their educational needs and to contribute to family savings.” 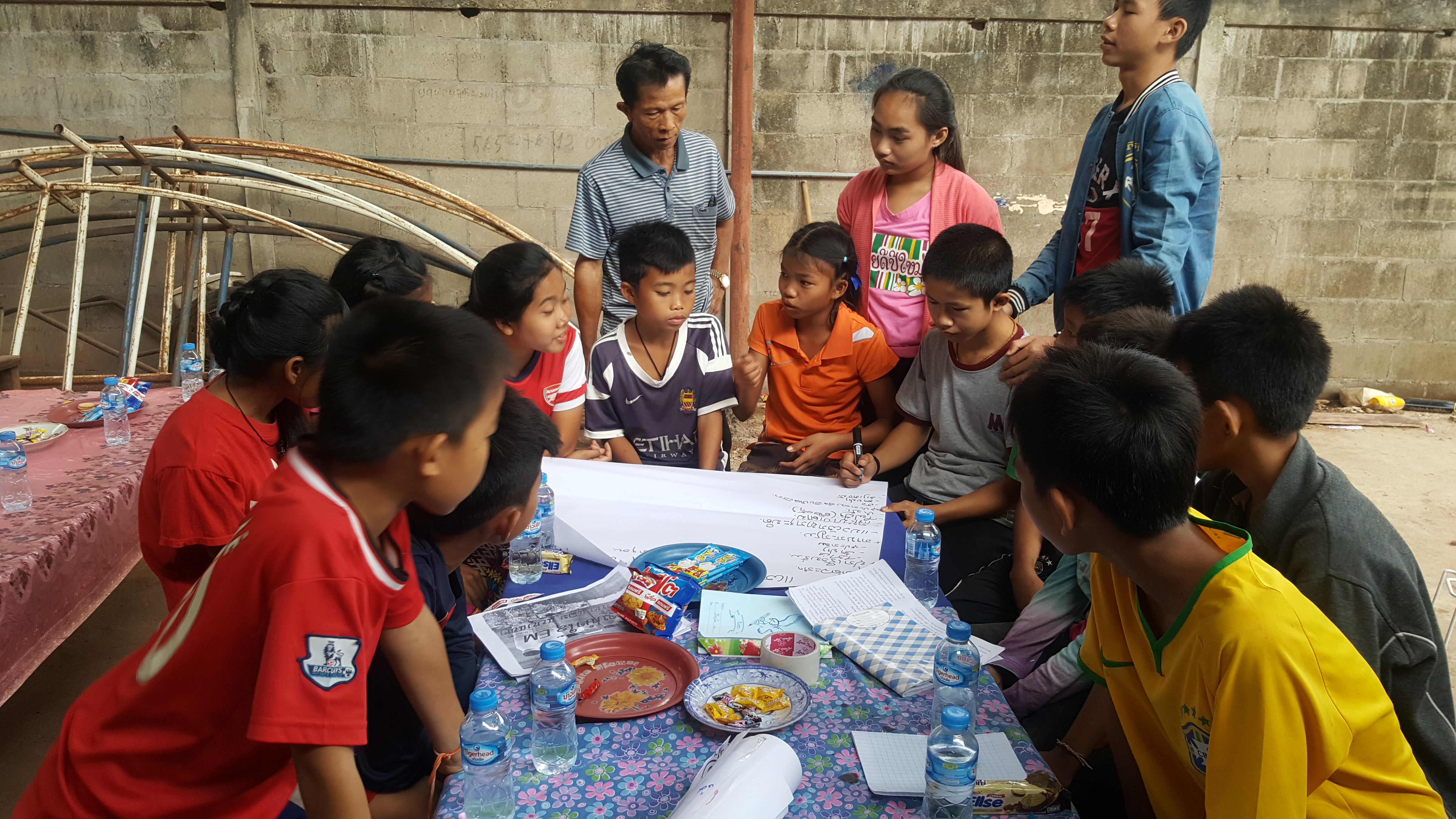 “Before we had four vegetable markets where we would sell our produce. But at the CDAIS ‘marketplace’ event we made new contacts, and now we have eight markets where we can sell. But the problem is that we can’t produce enough to meet this additional demand! Though at least we know that every extra we can produce, we can sell…”

Their markets are also growing thanks to social media, and help from the youth. Adult farmers thought that they could sell their fruit and vegetables in weekly food baskets, if only the youngsters could help them to advertise this ‘offer’. Then thanks to training from the Lao Farmers Network, two youth learned how to take attractive pictures of their vegetables and gardens using their mobile phones for posting on the group’s Facebook page. Now the group sells four different vegetable baskets each month to make traditional recipes: bamboo shoot soup, sweet and sour chicken soup, fish sukiyaki, and salad. They are also testing their new underground cold storage unit that works without any electricity, and which they hope will allow them to store some vegetables for up to a month. 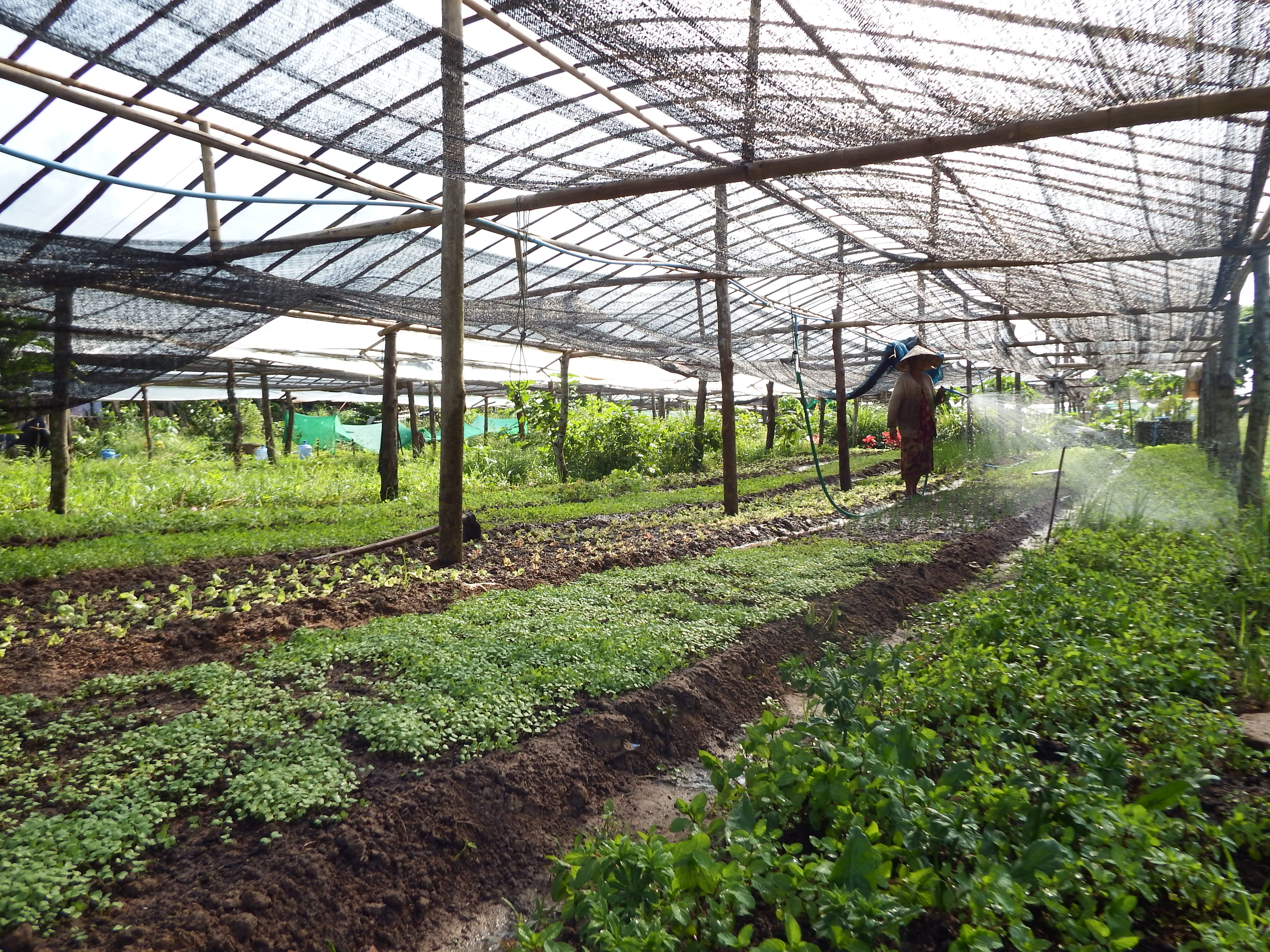 What the future holds

Mrs Khammone Luanglath is clear about the anticipated benefits. “At the end of next year when we have carried out the action plan, we expect to have diversified and increased our production, we will be stronger in our marketing, and we will have transformed from a farmers group to a fully functioning farmer cooperative.”

In 2018, they are planning to expand production onto individual members’ land, leaving the original two-hectare plot as a demonstration and experimental site. They also plan to build offices and a new organic vegetable store. And as their successes are being increasingly acknowledged, thanks in part to the social media coverage, they are receiving more and more visitors. Attracting locals and foreigners, the Tongmang organic vegetable gardens are even starting to become a bit of a tourist attraction!